As lovely as Thanksgiving was - in particular, the lack of meetings and other work-related obligations - the end of the holiday weekend means that it is crunch time for the end of the semester. I think this is why I struggle with feeling sufficient holiday spirit - in the next two weeks, I need to wrap up the classes I attend AND the class I teach, take two tests, grade three assignments, and (I'm just guessing here) talk a few students off the ledge when their final grades are not what they expected. Oh, and two holiday get-togethers for work, a potential open house for my husband's staff here at our house, not to mention Christmas shopping and cards and...

Maybe I shouldn't think about it all at once. One day at a time. I might get down to one hour at a time by December 16th. I do appreciate that there IS an endpoint. A light at the end of the tunnel. Let's hope they're Christmas lights this year - I want to keep the good feelings from the other night's concert going as long as I can!

On a totally random note, I'm extremely curious about why our neighbors walled off (and insulated, from what I can tell) a corner of their screen porch. Hm. He sided it, too. My husband's guess is pantry. My guess was cold room / canning room. They're too nice for it to be something sinister - although isn't that what the neighbors always say? :)
Posted by Flyover Belle at 5:18 AM No comments:

Starting off on the right foot

I'm hopeful that my efforts to de-Grinchify this year are off to a good start. We went to a holiday concert last night - on a WORK night, at 7 pm! (we're such crazy people) - and it was super awesome. There was an orchestra, and some beautiful singing, and then they had us sing along. So. Much. Fun. Now I want the Christmas CDs in the car, so I can sing along when I have the car (which is not that often).

We also managed to catch Gnomeo and Juliet on TV Saturday night, after a full day of watching college football. I could probably watch football or basketball all the time, but my husband is not as enthralled with watching teams that he doesn't really care about. So we try to find a balance. Anyway - he found the movie while I was cleaning up from dinner, and we kept it on. It was hilarious - the perfect ending to a lazy, chilly, rainy day on a holiday weekend.

I have three more weeks in the semester, including finals week. This year will be a bit more complicated, as I have to balance grading and feedback for my own students with two finals for classes I am taking. My students are collectively freaking out about the paper due Friday, and they have another big project due next week. I have a feeling I'll be spending a lot of time answering panicked emails this week. On the other hand, I don't have to teach next semester, so I'll have more time to put into my own projects. And, wow - only three weeks left in the semester. At the beginning of each one, I think we're never going to reach the end. Then we hit week 3 or 4, time speeds up, and before I know it we're posting final grades.

I'm ready for our winter break, but also realize it will be a busy time for me. Catching up on papers and projects that have been on the back burner all semester, and trying to find some time to clean up and organize around the house. Oh, and going to see my family for 5 days. And if I'm going to maintain our momentum for being in the holiday spirit, I should probably think about decorations and lights and a tree and...maybe I'll just start with the Christmas music.
Posted by Flyover Belle at 5:36 AM No comments:

We had a lovely, quiet Thanksgiving with friends and family, which went much better than I expected. Just goes to show that my anticipatory anxiety over how these sorts of things will go usually doesn't lead to bad outcomes. Whew.

We are still working our way through leftovers - one drawback of not having kids, I think. :) I also indulged my husband and made him a couple of his favorites on Friday that were not on the menu for Thursday. I indulged myself, as well, since one of my favorite activities is cooking, and I didn't get to do nearly as much of that on Thurs as I had hoped.

And now we move into the Christmas season. And I have to be honest, the last few years I have been exceptionally Grinchy. I think it has something to do with balancing the end-of-semester insanity / sleep deprivation / grading with having holiday cheer. I do think that we are at a disadvantage, not having kids. We don't have to put up a tree - the dog doesn't care either way. We don't even have to give presents to each other - in fact, this is another year in which we've already given each other our gifts, leaving nothing to open on Christmas itself. We don't go to church, so we miss out on the Advent build up.

Despite my recent history, I'm going to make an effort to be less Grinchy this season. We are going to a Christmas concert tonight by a big name group. There will be singing along, and a visit from Santa. Given the size of our town, there will probably be people we know there. And there are other fun things starting up next weekend - some of which I hope to actually DO this year.

One difficulty is that my husband and I feed off of each other's Grinchiness. We'll make plans to go to a concert (one for which we do not need to buy tickets in advance; hence, we're not obligated to go), and then cancel them last-minute. We'll talk about putting up a tree - artificial or real - and then time will get away from us and it's the weekend before Christmas and neither of us feels like taking the time. Breaking out of that cycle will take some work, but I think it's do-able. I need to start by changing my attitude, which may be easier said than done. On the other hand, recognizing my lack of holiday spirit in the last few years, and vowing to make an effort to change that, is probably the first step.

Please note, however, that these steps do NOT include going to the mall. At all. I hope. I'm not that nuts.
Posted by Flyover Belle at 5:11 AM No comments:

I debated writing about my efforts to be less Grinchy this year, or my dawning realization that I think I have body image issues. But I'm glad I ditched that plan to reflect - at least for a few minutes - on how lucky I am, and how much I have to be thankful for.
Posted by Flyover Belle at 5:03 AM No comments:

No posting for 6 months, and then I decide to do a "what's frustrating me now" post to jump back in? I guess if I can't do that here, then where can I do it? I've noticed that my fuse is much shorter recently, and I attribute at least part of that to the fact that I have stopped writing here - stopped keeping what could be a journal for me to dump my thoughts and (yes) frustrations. In an effort to keep things a bit more even-keeled...well, we'll see. I can't promise posts, but I can try to post more frequently, get out the things that are driving me nuts, and move on from there.

In no particular order...
Those were the biggies for now, I think. I'm sure I'll think of something later. And then I'd like to move on to actually, you know, documenting our lives. Because there are some good things that we are doing - some fun things - and I think it would be nice to remember those down the line.
Posted by Flyover Belle at 6:49 AM No comments:

Thanks for stopping by!

Thank you so much for stopping by... I write here more sporadically than I had hoped, usually when I am dealing with being child-free not by choice. We went through infertility workups and decided to step off the treadmill when IUIs didn't work and we were told IVF was our only option. I'm learning to live with this...although sometimes not as well as I would hope. Please email me or leave a comment if you like! 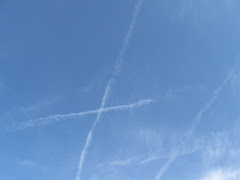